Skip to content
A month dedicated to World TB day was held in Kyrgyzstan, organized by Red Crescent Society
Numerous events dedicated to World TB Day were carried out during March across the country. We would like to highlight the most interesting and valuable among them:
Naryn and Jalal-Abad regions
– Volleyball tournament and relay race among medical workers, volunteers, TB patients, and TB contacts was organized in Naryn and Jalal-Abad regions;
-Puppet theatre on cough hygiene was organized as part of Healthy lifestyle promotion in 3 kindergartens of Jalal-Abad region;
– Concert and drawing contests with the distribution of food kits were carried out in children and adult warns of TB hospitals in Jalal-Abad and Naryn regions;
– Self-Support groups with invited guests were organized by visiting nurses;
– Distribution of food kits were carried out for TB patients in difficult life situation;
-Information sessions and the flash mob on TB were conducted among students and the general population;
-Press conferences and round tables with stakeholders were conducted.
Talas region
-Informative video on local TV on a daily base in Talas region. The participation in the tv program “Den-sooluk” with “Everything about TB” (40 min program dedicated to World TB day)
– Promotion “Free X-ray examination”. X-ray examination of the following persons: homeless, socially vulnerable.
– Informing the population about TB. Quiz (question – answers) on the topic: “Learn more about TB”.
– Mass procession along the route: from the market to the center of Talas.
– Printing in the newspapers the ‘Prevention of TB” topic. Publications on TB, the activities of Talas Regional Office RCSK within the framework of the USAID project.
Chuy region
– Campaign “Candy for a cigarette”. A mass action aimed at drawing the attention of the general population to the problems of respiratory health.
– Info sessions at the Bulak central market in Tokmok, Chui. Volunteers, employees, the committee on health promotion – distribution of info brochures for the population and a conversation about TB.
– Conducting the sports contest “Life without TB”. The school children held sports competitions between classes.
– Marathon (race) in Moscow district. This action is aimed to attract the population to a healthy lifestyle, namely, paying attention to the health of the respiratory system, while informing.
– Quiz / Exhibition in the Moscow region. Volunteers conducted a survey among the population about respiratory diseases, what diseases are common among the population, presented incentive prizes, positive answers, and exhibited works made by healthy lifestyle volunteers.
Osh region
– Drawing competition among students.
Quiz and slide on TB.
The flash mob (dance) was organized by Red Crescent volunteers.
An information session was held among the participants.
Also, the winners of the competitions were awarded memorable prizes from the Osh regional office RCSK.
Musical performance for the guests of the action.
– Conducting a sketch on the topic: “Religious view on the treatment of TB patients.”
Batken region
– Informing the population about TB through the media, and social networks. Placement of posts, audio, and videos on social networks, radio, television, and Facebook.
– Procession in the city of Batken and a bike ride, quizzes at the universities of Kyzyl-Kiya. Carrying out a joint procession with the TB Dispensary in Batken, a bike ride in Kyzyl-Kiya, conducted to the World TB Day.
– Participation in the interview on Batken TV (1 airing). Joint live interview with representatives of the Batken Regional TB Control Center of Batken region on the local TV “Batken TV” on TB prevention and control.
Bishkek city
– The event for children in the children’s department of the National Phthisiology Center. Sweet sets in the amount of 37, board game sets, books, and educational games were purchased.
In addition, animators were invited to an active show program and a soap bubble show.
– Audio tracks in “Europe Plus”. From 22 to 26 March 2022 audio tracks dedicated to the issue of stigma and discrimination in TB were broadcast. The broadcast took place 3 times a day.
Issyk-Kul region
-Information sessions among communities, schools, and universities.
– Carrying out a joint procession with the Family Medicine Centre, Regional Tuberculosis Control Center, and local self-government bodies.
– Sport competition among pupils. 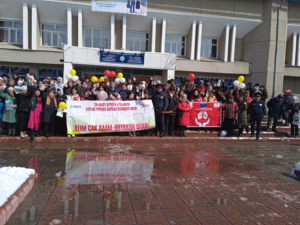 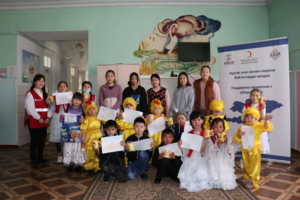 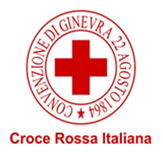